After 9-11 the fear had gotten worse and worse. We feared for our lives
from the terrorists that were prepared to die to inflict their damage
on our society. I felt so powerless against it all. To top it off, my
own city had fallen into the hands of strangely powered villains.
Nobody knew where they came from, they just suddenly were there. They
were armed with futuristic blaster weapons, some could control heat or
cold or fire energy blasts with their fists. And where was I? Teaching
mythology at the University. I was too weak to fight. But looking at
the movie reels of the war, I could think about only one thing. What if
the old gods still lived. What if we had heroes like Hercules and
Achilles at our side? What if we were able to wield the power of Zeus
to strike at the enemies threatening our city?
And then came the day I got my chance....


I was walking across the campus grounds with professor Monica Sawyer
when out of nowhere five leather-clad men appeared. On the backs of
their jackets they wore a logo that said 'Speed Demon Gang.' I knew
them. They'd been plaguing the city for weeks now. They'd been
looting stores, beating up people at random, stealing purses; they'd
even been raping women. They acted like a street gang permanently on
amphetamines with an extra edge - super speed. They seemed to be able
to move faster than sound, which made the police helpless against them.
How do you stop a criminal who you can't hit, can't shoot, just
because he's so fast you hardly see him? The fact that they now were
on campus grounds spelled big trouble for everyone present.
One of them walked over to Monica. I immediately felt all my protective
instincts rise to the surface. I'd been in love with Monica since the
first time I laid eyes on her. A pity she's engaged to a tough cop
and not interested in a bookish nerdy professor like me.
The Speed Demon grabbed her arm. "How about a little kiss, hottie?"
"L-leave her alone," I told him. I wish I hadn't stuttered. Maybe
then I would've made more impact.
The Speed Demon laughed and shoved me to the ground. "How romantic.
You like being a hero? Well, maybe you can save a cat from a tree?"
He grabbed me and pulled me along with him. I couldn't resist against
him, everything just happened too fast. When he let me go I found
myself hanging in a tree. From there I could see the Speed Demons throw
rocks through the University windows, steal student's money and
jewelry.
After a few minutes they got bored. Maybe being able to do everything
at super speed does that to you pretty quickly. Anyway, the just left.
Kicking up dust, they were gone in the blink of an eye.
Monica stood at the base of the tree, looking up. "Need any help
getting down?"


Somewhere, in a secret location, filled with computers and ancient
artifacts a tall man stood, watching a monitor. In his hand was a large
bejeweled spear. He wasn't happy. The monitor showed the image of
four cops arresting the Speed Demons.
A scantily clad woman walked over to him and touched his chest. "Why
are you so angry?"
"There's some kind of costumed do-gooder in the city, taking out
my men. I invested in that gang. I'll need to invest some more. This
city will be mine, whatever the cost! And if that Godling character
wants to interfere... He'll die!" 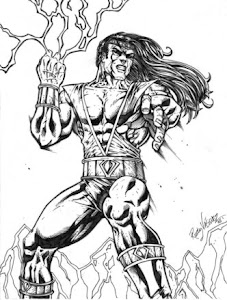 Godling - The One Man Pantheon

jvdsteen
I am a dutch writer, writing often in english. My special interests are crime movies and novels, rock music (I am a rock reporter for a dutch site) and comic books. You can write me at jvdsteen@hotmail.com